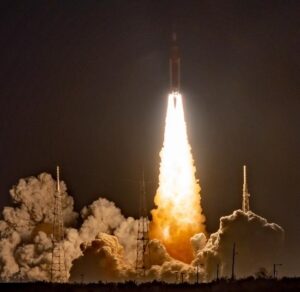 (Chatsworth, CA 16 November 2022) – The Artemis I mission, the first flight of the Orion spacecraft and SLS, is now underway after a successful launch from Pad 39B at the Kennedy Space Center at 1:47:44 AM EST (06:47:44 UTC) on 11/16/2022. Artemis I not only launched the Orion spacecraft to the Moon but also 10 6U CubeSats, most massing around 14 kilograms, which were ejected from the ICPS upper stage after the trans-lunar injection burn following launch.

Space Vector Corporation provided the Secondary Payloads Avionics Unit (SPAU) that consisted of a custom sequencer capable of deploying up to 17 payloads along with an integrated Li-Ion Battery pack and Battery Management System (BMS). Space Vector under contract directly to the NASA Marshall Space Flight Center developed the SPAU in less than a year and performed a comprehensive qualification test program before delivering the first production units. Ten CubeSat missions were delivered to the Kennedy Space Center and processed for flight during the summer of 2021. They were mounted on a payload ring on the ICPS second stage along with the SPAU that controlled the deployment sequence. “The SPAU payload sequencer was designed to be programmable allowing NASA ground personnel the ability to load various deployment skits right up until launch” said Eric Grabow, Space Vector Program Manager “The SPAU was also completely independent with its own internal batteries that received a wake-up signal after separation of the Orion spacecraft.”

After Artemis I’s successful launch and trans-lunar injection burn, the 10 CubeSats were deployed starting four hours after launch and finished the process after eight hours.

Space Vector is currently producing a third SPAU in support of the Artemis III mission.